Church of the Holy Spirit

Due to the increasing population in the southern section of Newington, Archbishop Henry J. O’Brien established a second Catholic parish in Newington on September 10, 1964. He appointed Father Edward J. Radzevich to his first pastoral assignment to lead the new parish. The first 700 families were drawn from two neighboring parishes, St. John the Evangelist in New Britain and St. Mary’s in Newington. Twelve acres of rolling farm land had been acquired on Church Street in 1963 for the site of the proposed plant.  The Sunday Masses were celebrated in John Paterson School, just across the street, and an old farmhouse was transformed into the temporary Holy Spirit Chapel where daily Masses were said. The first rectory was a small modern home at 189 Church Street.
Father Radzevich began a fundraising campaign to build the church, the parish center, and the rectory. Supportive parishioners undertook a variety of projects from strawberry festivals, card parties, pot luck suppers and Communion breakfasts and commenced a campaign of memorial pledges and donations. The groundbreaking took place on March 6, 1966, and the first building completed was the parish center. Five months later, all the facilities were readied, and the dedication of the church was held on April 30, 1967.
​
Father Radzevich, pastor for almost five years, succumbed to a long illness on May 13, 1969.  Father John T. O’Connor arrived in September 1969 and served for 28 years, until 1998 when Archbishop Daniel Cronin assigned Father William Dudack and Father Lawrence Bock to join Father James Kinnane.  Within months of his arrival, Father Dudack succumbed to a long illness.

On June 29th, 2017, as part of the Archdiocese of Hartford's restructuring effort, the Church of the Holy Spirit was officially merged with Saint Mary Church in Newington to form a new parish, known as Annunciation Parish.  By merging the two churches into one parish, the Church will be better equipped to serve the Catholic community of Newington while creating a sustainable plan for the future. 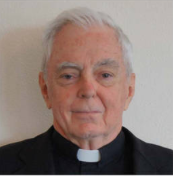 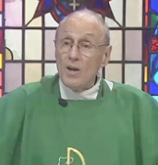